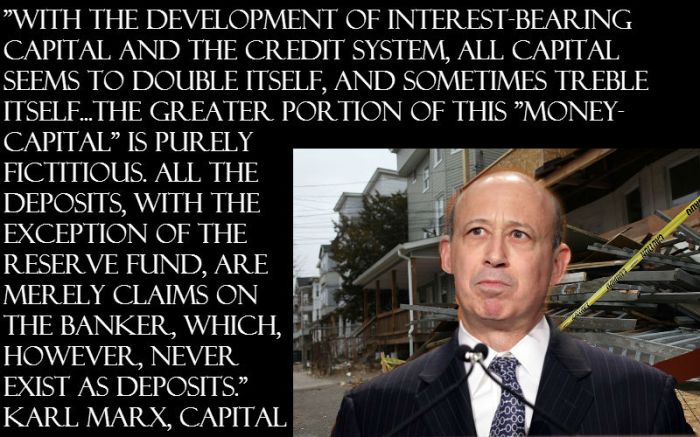 The man pictured above nervously staring down the truth that Karl Marx wrote more than 121 years ago is Lloyd Blankfein. Mr. Blankfein is the Chairman and CEO (a duality typical of modern finance) of Goldman Sachs. Despite his grim look in this picture, Mr. Blankfein has a sunny disposition nowadays despite having had “600 hours of chemo” to eradicate the cancer growing out of his lymph nodes. Supposedly he’s been cured, which I’m sure was a big relief to Democratic presidential nominee Hillary Clinton. Clinton is close to Blankfein, and to Goldman Sachs in general. While mainstream media likes to frame Gary Gensler as a “Wall Street cop,” the campaign of Bernie Sanders responded to his hiring as Chief Financial Officer of Clinton’s campaign by saying that they “won’t be taking advice on how to regulate Wall Street from a former Goldman Sachs partner [at the age of 30] and a former Treasury Department official who helped Wall Street rig the system.”

Gensler is in many ways the past and present of the Dodd-Frank Act, and it seems fitting that Clinton wants to make him its future as well. As I’ve speculated before, I think Clinton is quite serious when she says she’ll use Dodd-Frank’s provisions like orderly liquidation authority. It serves a duel purpose for her: on the one hand, a political move to show Democrats that her cozy relationship with finance will not stop her from enforcing the law. On the other, neoliberalism is all about fostering public-private partnerships, key word being partnerships: ultimately a bank that sufficiently jeopardizes her agenda will be stopped with the power of the state, albeit far less violently than other stumbling blocks. But whatever bank goes to the chopping block (my guess Credit Suisse, but if she’s really feeling fiery Bank of America’s return on assets have been doing fairly poor), it will not be Goldman Sachs.

Ultimately, despite the good will of many advocates, economists, and even a few politicians, the Dodd-Frank Act is not enough. As I’ve covered in this series, risk has not been reduced enough and the Volcker Rule is not Glass-Steagall 2.0; orderly liquidation authority is a cumbersome process poorly designed as the preventive medicine of the financial system; and the finance industry and its allies will continue to chip away at the provisions using our Bill of Rights with disastrous consequences worldwide. And ultimately nothing, no liberal regulation or free market deregulation, will prevent the next recession. As Michael Roberts wrote back in February:

Maybe it won’t be in 2016.  But the factors for a new recession are increasingly in place: falling profitability and profits in the major economies and a rising debt burden for corporations in both mature and emerging economies.

The next recession likely will not be the last either. While I don’t ascribe to Marx’s conjecture that the falling rate of profit would be the “gravedigger” of capitalism nor do I want to get into the debate about whether or not he actually felt that way or if the law/tendency/whatever is true, suffice to say that the one thing Harvey and Roberts agree on is that we will not regulate our way out of the cyclical crises of capitalism.

So what is to be done?

We must first wake up. Wake up to the reality that our current economic and political system will never solve this problem. Wake up sheeple!

Just kidding, this won’t turn into Zeitgeist I promise. If anything the tendency of the US Left to focus on critique and shallow immaterial goals of “visibility” rather than solutions is one of its biggest problems and, in my opinion, why it still lacks so much of the support of the proletariat. While we should not pretend that liberal reforms will save us, there are steps that we can take to reduce the harm to the proletariat of the next recession and begin to dismantle capitalist finance and begin to build a democratic economy that works for the good of all.

(1) Divest from the largest banks

No this isn’t going to be me trying to guilt you into abandoning your Chase account to switch to a credit union (though you should). When I say divest, I mean to push back against anything and everything the major banks are involved with. Lobby to get subsidies and tax-cuts taken away. Protest every revolving door appointment and employment of bank executives as government officials. Make a fuss when “leaders” of the movement get comfy with them, even if they’re well-intentioned or your “faves.” Lobby for incentives and subsidies for credit unions. Lobby for laws and regulations that damage and impede the ability of the banks to exploit people. Literally anyone can do it, and if you have a computer you don’t even have to leave your house. This won’t kill any banks, it will just weaken their stranglehold on our political system, hopefully enough to push for progressive nationalization.

(2) Don’t be resigned to crowdfunding

The revolution will not be crowdfunded. While the platform of crowdfunding can be important for emergencies like preventing an eviction or bailing someone out of jail, ultimately crowdfunding is fairly traditional in its basics as a capitalist investment tool. Populist crowdfunding cannot do much when the wealthiest people of this country control so much more of the wealth than working class people. Nothing shows this quite as clearly as the rise of real estate crowdfunding through platforms like Fundrise, Realty Mogul, and Patch of Land. As guy-who-unfortunately-looks-like-my-ex and Chairman of LDJ Capital David Drake puts it:

>an improving labour market could drive up wages…As a result, the diversification of a portfolio across various properties in order to mitigate risk is more possible through crowdfunded deals.

While Elizabeth Warren makes an impassioned and accurate condemnation of Republicans like Mitch McConnell and Paul Ryan rigging our legal system to serve the 1%, it was under the leadership of the Democrats that the foundation of the Great Recession was started. And while some Democrats like Bernie Sanders advocate against many of the pro Wall Street laws that enjoy bipartisan support, ultimately their own plans do not offer actual solutions to prevent more recessions in the future. Bernie Sanders is not a socialist, and socialism will never be accepted in the Democratic Party.

We are one of the few countries where every legislature, from city to federal, is controlled almost entirely by either Democrats or Republicans. Third party candidates like Kshama Sawant show that it does not have to be this way, but as much as I support Dr. Jill Stein’s run for president this change has to begin at the bottom. We need to stop wasting our time on campaigning for Democrats who will betray us or Democrats who will never gain power over the party. We must also put aside sectarian differences and support all candidates, no matter how imperfect, who advocate for socialism.

One of the more annoying bits of misinformation spread by conspiracy theorists is that the Federal Reserve is not part of the government. It is. But it is an incredibly undemocratic part of our government. The Board of Governors should not be appointed by the President: they should be elected and impeachable. Until then, future legislation like the Dodd-Frank cannot count on the Fed to do the right thing and power should be delegated to the appropriate departments. Here is a good list of just a few campaign goals in relation to the Federal Reserve system.

Socialists need to intimately involve themselves in all struggles against capitalism, both in the capacity of groups and parties as well as individuals. It is disgraceful how much Marxism has become associated with abstract teleology and only involving ourselves in peoples’ struggles where bricks start getting thrown. There are several reasons for this, including the mainstream media’s propaganda and the stigma which keeps many socialists from publicly identifying as such. But that campaign of discrediting will never let up, so it is up to socialists to involve themselves in struggles as socialists in public or semi-public ways. Coalitions are a great way to do this: less radical community groups like neighborhood associations can give the campaign a “respectable” face to outsiders while radicals push the group and its members to move to the Left. This is especially needed in finance reform: as my series has illustrated, Dodd-Frank was not nearly enough to prevent another recession that will be devastating to those with the least. Finance reform also too often operates as a “race neutral” issue which is patently ridiculous when the effects on wealth are so racially disparate:

This is the double meaning of the title of this series, “The End of Dodd-Frank.” For most of this series I’ve focused on the ways that it has been or will be undermined. But I want to conclude with how we need to end the Dodd-Frank approach to changing finance.

I first realized radical potentials to finance when I researched how Maggie L. Walker and other Black leaders financed the Black communities of Durham, Harlem, and Richmond through clever, community-oriented organizations like mutual beneficiary societies and penny-savings banks. Unlike most of the Black business owners of her time, Walker was outright disdainful of the wealthy people in her own community for refusing to help bear one another’s burden when all that they had was from others giving them that courtesy. Unfortunately Walker, unlike her friend W.E.B. DuBois, passed away doubting but never renounced capitalism. DuBois, on the other hand, perfectly encapsulates why we must move beyond a liberal approach to investment in our communities:

I saw Scandinavia choosing a different method, halfway between socialism and capitalism. In he United States, I saw Consumers Cooperation as a path from capitalism to socialism, while in England, France and Germany developed in the same direction in their own way. After the Depression and the Second World War, I was disillusioned. The progressive movement in the United States failed. The Cold War started. Capitalism called communism a crime.

Today I have reached my conclusion:

Capitalism cannot reform itself; it is doomed to self-destruction. No universal selfishness can bring social good to all.

2 thoughts on “The End of Dodd-Frank Part 4: Financing a Democratic Future”