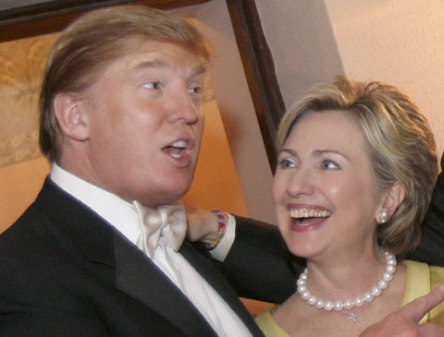 Last night’s first presidential debate between neoliberal savior Hillary Clinton and Nazi billionaire Donald Trump had plenty of lies and misinformation, mostly of course coming from Trump who cobbles his statements together from Breitbart and your grandpa’s racist email chains. But there was one thing where, as wrong as Trump was, Clinton was actually more wrong, and that was the claim that stop and frisk was ruled unconstitutional.

The date is March 12, 2015 and I’m at Cardozo Law School for a presentation called “Policing, Conflict, and Change.” Like all CLEs and legal events I was mostly there to look for potential husbands so that I can be an unapologetic Marxist firebrand and not worry about, you know, a job. But in all seriousness I was mostly there to see all-star attorney Darius Charney of the Center for Constitutional Rights who for our purposes you should know as the lead counsel of Floyd v. City of New York. While my involvement in policing issues for the past few years means I’m not naive to what difference any one case can make, I still thought that so soon after the case that the room would be at the very least hopeful for turning back the tide. But another panelist, Professor Jeffrey Fagan, opened the panel with a somber tone that would be held throughout the discussion (and my apologies for this being an imprecise quote): “I was asked to come here today to speak about the Fourth Amendment, which is somewhat ironic because there is not much left of the Fourth Amendment.”

So what did Floyd do? Floyd was a great opinion, particularly for refusing to limit Equal Protection to policies and practices that are facially discriminatory rather than those that have a discriminatory impact. It refreshingly utilized empirical data to evaluate reality rather than making reality fit the legal theory, in large part because of Attorney Charney and a plethora of community organizers in the Communities United for Police Reform coalition. It has almost eliminated the practice of stop-and-frisk in New York City.

A rule that a statute designed to serve neutral ends is nevertheless invalid, absent compelling justification, if in practice it benefits or burdens one race more than another would be far reaching and would raise serious questions about, and perhaps invalidate, a whole range of tax, welfare, public service, regulatory, and licensing statutes that may be more burdensome to the poor and to the average black than to the more affluent white.

Now many of us would argue that a whole range of statutes should be invalidated, but unfortunately that is generally not how the law is applied. The key phrase here is “absent compelling justification.” Essentially the racist impact of stop-and-frisk is a “compelling justification,” according to the Floyd court, to be an Equal Protection violation despite the law and practice being facially neutral. As such, if the government can find a way to conduct stop-and-frisk without having such an egregiously racist impact, it is wholly constitutional. And on top of this, the Floyd opinion is from the Southern District of New York Court, which means it only applies to New York City and a few outlying counties and cities that do not have significant amounts of stop-and-frisk to begin with. Hillary Clinton is flat out wrong that stop-and-frisk is unconstitutional: stop-and-frisk is still practiced across the country, including in New York City.

The number of Terry stops in New York City has dropped though, with 2015 seeing 22,939 stops. That may seem like a lot until you know that the high point of stops in NYC was 685,724. Interestingly, given the argument in Floyd, it appears that the stops are about as racially disparate and implicating mostly innocent people as they have always been. That being said, I do think that stop-and-frisk is slowly fading out of existence. While that is certainly a victory, especially for the Black, Latinx, and Native communities it has terrorized, it comes from more than just the gains made by community organizers and the lawyers who serve them. Two innovations in policing have increasingly made stop-and-frisk obsolete: mass surveillance and ‘predictive policing.’ While both arguably are less oppressive to communities as a whole, both also can more totally be used to repress dissent. It is the reason that the media conveniently ignores about why less and less people show up for protests in the United States every year.

If you’re like me and live in a majority person of color, working class neighborhood in a major city you have probably noticed over the past couple of years that there have been more helicopters hanging out above your block. Not only can law enforcement hijack your electronic devices to spy on you, they can do it undetected. We are quickly heading towards a critical mass of states that have Stingrays or similar devices for intercepting cell phone activity.

Predictive policing is the maturation of this use of mass surveillance. Law enforcement can not only spot crime that is in the process of occurring, but can monitor those that are more likely to commit crime to intervene before the completion of a criminal act. The factors used lay on a wide spectrum, from a prior criminal history to mental health commitment records to visiting a certain mosque to tattoos to behavior (i.e. fidgeting, looking around repeatedly). Theoretically it could also use race, gender, political affiliation, and other such factors as well. At least in regards to political affiliation we already have a lot of proof that this is happening.

This change in strategy brings the contradiction of liberal formal equality and state oppression to collision. The liberal’s argument for why stop-and-frisk or even the prison industrial complex is ethically wrong usually rests, as it did in the Floyd case, on innocent or nonviolent people of color being caught up in the criminal justice. Less credence is given to those who have decidedly broken the law regardless of the backstory. When CeCe McDonald kills a man in self-defense and is incarcerated, the liberal can call that an injustice, a transgender woman of color being treated differently than a white cisgender (not transgender) man would have been treated in the same situation. But when a trans woman of color has been convicted of murder due to more murky circumstances like gang duress, and is being subject to inhumane treatment, the liberal is silent or even withdraws support.

Capitalism and white supremacy constantly bombard people with the messages that greed is good, that we should only look out for ourselves, that your value is only measured by what you own, that the only way to be respected as a Black person is to be famous and wealthy, that your culture is extinct and what is left of your people are worthless drug addicts, that Black women only should exist for entertaining the white gaze, that your Latinx community is lazy and stealing what rightfully belongs to white settlers, etc. Why is it so surprising to liberals that being constantly surrounded by such hate and violence could make people think that their only way of getting ahead or surviving was through hate and violence?

Rather than continuing to uphold these doctrines of formal equality, these developments demand two modes of praxis: (1) abolishing the obsession with “individual responsibility,” both in our personal and political discourse. People do not act within a vacuum. Our decisions, and even our ethics and morality itself, are formed by a confluence of circumstances. An Italian court recently took a step in the right direction when it decided the following:

The condition of the defendant and the circumstances in which the seizure of merchandise took place prove that he took possession of that small amount of food in the face of an immediate and essential need for nourishment, acting therefore in a state of necessity [and not being liable for theft].

But we don’t need to go to Europe to see such recognition. While not binding law since it is a dissent, Justice Sotomayor shook the United States legal world with her dissent in Schuette v. BAMN:

[All citations removed] Race matters. Race matters in part because of the long history of racial minorities’ being denied access to the political process…Race also matters because of persistent racial inequality in society—inequality that cannot be ignored and that has produced stark socioeconomic disparities.And race matters for reasons that really are only skin deep, that cannot be discussed any other way, and that cannot be wished away. Race matters to a young man’s view of society when he spends his teenage years watching others tense up as he passes, no matter the neighborhood where he grew up. Race matters to a young woman’s sense of self when she states her hometown, and then is pressed, “No, where are you really from?”, regardless of how many generations her family has been in the country. Race matters to a young person addressed by a stranger in a foreign language, which he does not understand because only English was spoken at home. Race matters because of the slights, the snickers, the silent judgments that reinforce that most crippling of thoughts: “I do not belong here.” [emphasis added]

(2) We must push the discourse to properly emphasize what kinds of misconduct and violence most egregiously violate our social well-being. The most obvious example of this is the police shootings of people of color. I am certainly not the only person to express the sentiment that those empowered and paid to be our protectors should not be held to a lesser standard of self-defense: if anything it should be a greater standard. But I cannot possibly explain it better than this protester (and if anyone has her name please let me know so I can give proper credit to her genius): 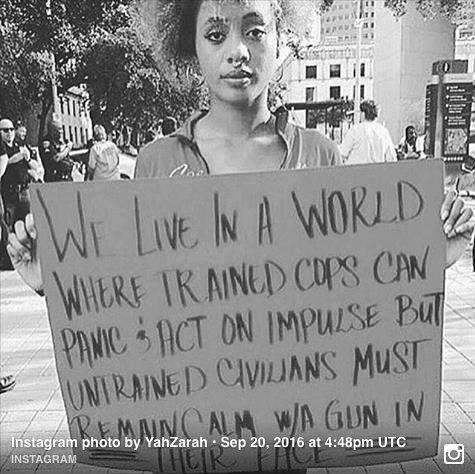 But this is not just police. This is how our “justice” system overlooks the millions who have died for hate and profits because of George W. Bush’s ‘War on Terror.’ How it overlooks or even condones the continual fostering by multinational corporations of mass rape and other violence in the Congo. How insurance companies are more universally insured by our government than we are. How the wealthy increase their holdings with the exploitation of labor and financial magic tricks and then hoard it, scoffing at any attempt to share and tax it. As Donald Trump once said:

The debate last night was a farce as soon as ‘the reasonable alternative’ shook hands with a man who would say such a thing, and was thoroughly buried when Secretary Clinton said she would support his presidency. The reality of the formal equality of liberalism is that idea of fairness is uphold whereas any sense of economic fairness, any prevention of the Donald Trumps of the world from living their extravagant lives at the expense of billions of others, is dismissed. Is that a reasonable alternative?

One thought on “Does Stop And Frisk Still Matter?”