Capitalism is a magic trick. Through sleight of hand obfuscated by the charismatic voice and flourishes of the illusionist, the doubts as to the superiority of this economic system over any other possibility disappear. The illusionist reaches into his hat and pulls out the profit motive. The profit motive is the great and mysterious force that binds capitalism. An ethos of greed supposedly needed to incentivize people to work. The wage laborers work and work, but somehow the profits evade them. The illusionist opens the trap door and there are the workers’ profits.  But in modern globalized capitalism, the traditional exploitation of labor is just one of the many magic tricks that the illusionist can perform:

The nonfinancial corporate sector has deleveraged even less than households. Instead, companies have taken advantage of low interest rates and plentiful liquidity to take on more debt to buy back equity to support share prices, pay larger dividends, and hoard cash. In the United States, corporations have expanded their debt relative to GDP by 14 percent…As a result, corporate leverage (the ratio of net debt to GDP) is higher than at this point of business cycle than in recoveries from previous recessions. That does not bode well for a quick escape from the depression if interest rates on debt start to rise. Michael Roberts’s The Long Depression (pg. 109-110)

This is the magic trick I will be focusing on, particularly open market repurchases and how the law regulates, and does not regulate, them. Open market repurchases are one of two options for companies to distribute earnings to their shareholders, with dividends being the other option. But corporations are not choosing to repurchase rather than distribute dividends. Rather they are slowly still increasing dividends while massively increasing buybacks bring the distribution about neck-to-neck with operating earnings:

Prof. Jesse M. Fried identifies four main advantages of buybacks over dividends: they (1) distribute excess cash more tax-efficiently than dividends; (2) pay out transient cash flows more cost-effectively than dividends; (3) acquire shares for use in employee stock option plans; and (4) boost liquidity, which as we saw in the Roberts passage allows companies to take on more debt and begin the process all over again (Informed Trading and False Signaling with Open Market Repurchases, 93 Calif. L. Rev. 1323, 1328).

Further, firm managers may engage in repurchasing practices such as informed trading or false signaling in order to benefit themselves at the expense of the aggregate shareholder value.  Informed trading is like insider trading: the manager uses private information to make a decision to repurchase stock right before an increase in price or right after a decrease. Conversely false signaling is announcing that the company is going to make stock repurchases in order to artificially increase the value of the stock with no intention of making repurchases or making low value ones they counteract by selling off their own stock at the new high price.

What is the regulatory scheme for stock repurchases? The last SEC Rule amending 17 CFR Parts 228, 229, 240, 249, 270, and 274 took effect in December of 2003. Rather than preventing abuse and behavior that destabilizes the market, the SEC continued to construct regulations to explicitly absolve managers engaging in stock repurchases of liability. A manager may voluntarily fulfill the SEC’s “safe harbor” guidelines in order to avoid most liability for their repurchases. Those guidelines are

Let’s look at the case of Apple’s major repurchases in 2013/early 2014. In the last week of January and first of February, Apple repurchased a mind-boggling $14 billion shares. It isn’t clear how that was divided between the two weeks, but let’s assume it was $7 billion each week. Over the past twelve months, Apple had purchased an additional $26 billion in its own shares. Again, we don’t know how this was split but let’s assume $3 billion a month. Based on our assumptions, this seems to be a violation of the safe harbor rule. The problem? For starters, violation of safe harbor is not in itself wrongful, but rather just disallows the limitation of liability. But more importantly, this is not actually a violation of safe harbor because it was not made following the announcement of a merger, acquisition, or similar transaction involving capitalization. However, it was still a very strategic repurchase. Sham Gad in the article I linked to states that the repurchases were due to disappointing stock prices for two weeks and that it may have placed a pricefloor on the stock. Even Gad admits that Apple bought the stocks at a discount. But he was, of course, only looking at the available data.

For in June, Apple did a seven-way split of its stock. It was a brilliant plan that retroactively made the Apple repurchase a much larger bargain. Just 48 days after the announcement, the stock was up 25%: 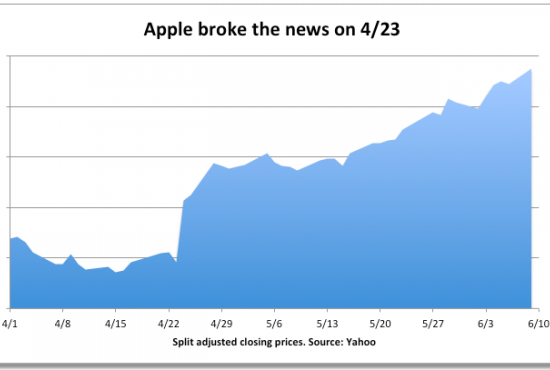 There are two important points to note here about why the SEC regulation on stock repurchases are almost comically ineffective. First, capitalism is a totalizing system. As antitrust regulation has had a resurgence since the break up of Microsoft, companies have found many clever ways to avoid such regulations, with tech companies leading the charge. The SEC is explicitly made to facilitate the “freedom” of the market rather than contain or control it. As such, all that capitalists (and especially finance capitalists) need to avoid any regulation and maximize their exploitation is to follow the path that the SEC creates for them with all of its loopholes. Rather than the skeptic pointing out the smoke and mirrors, the SEC is the magician’s assistant spinning around the empty coffin and telling us it is empty, only to feign shock when the magician appears during the next turn.

Second, magic tricks are best done by making sure the audience never sees it coming. The SEC regulation makes a huge assumption that announcements of major recapitalization transactions will be made before, rather than after, stock repurchases. As Apple has shown, doing so after can be majorly beneficial to corporations that strategize correctly. The price floor predicted by the mainstream business analysts was in no way comparable to the spike in share price that came with the 7 way split. That $14 billion repurchase had become $21.97 billion at its height of that year in November, an increase of 56.93%. This assumption that companies will be upfront and not manipulate their stock prices is clearly ridiculous, and comes out of again the SEC’s limitation as a “free market” facilitator.

But I do not simply say that any attempt to regulate stock repurchases is worthless. So what sort of regulations would be worthwhile? First, the Robin Hood Tax. By creating a financial transactions tax (as long as no one carved out a repurchases exception), you take away the largest incentive for companies to manipulate stocks and to instead put money into investments. Second,  eliminating safe harbor and replacing it with civil penalties for using repurchases to manipulate stock prices. Such penalties would not be based on the bureaucratic and complicated factors full of loopholes set forth by the SEC. Instead, it would be based on material evidence. If financial forensics determine the price was manipulated by a repurchase, regardless of the circumstances it was made in, that repurchase would be wrongful. If the SEC does not create this rule of its own volition, the provision could be included in the next major finance reform bill.

It may seem naive to expect another major finance reform bill, but it is a prediction I’m very confident in. Regulation of the finance industry follows a cycle parallel to the cycles of recession and depressions that happen in the economy. Contrary to popular belief, as clearly established by the example of former President Bill Clinton, having Democrats in office is no guarantee to strong finance reform when the opportunity comes around. With the even more pro-finance Hillary Clinton likely coming into office as President, bringing her right wing Democrat allies with her, special vigilance will be needed to make sure that our next recession is met with reform that creates the conditions for exposing capitalism’s contradictions rather than weak measures that perpetuate the liberal notion of capitalism as everlasting and inescapable.

2 thoughts on “Capitalism: A Magic Trick”