In my last post, I gave a straightforward but ambitious directive: “The Left needs to shake its discomfort with wielding power and build the intellectual and political synthesis to gain power.” While I did not mention it in the post (which focused instead on net neutrality), I was inspired by a hopeful shift being enacted by the Democratic Socialists of America’s (DSA) Medicare for All campaign. Those who worked on the Affordable Care Act may remember how power rarely if ever entered into the conversation. The power of health insurance corporations and powerlessness of the people were assumed, and instead the discourse focused on how to navigate these dynamics rather than disrupt or eliminate them.

While there are some who want to return to these paltry discussions, Medicare for All could be a crucial first step for the Left towards taking power. That is why I and many others have poured so much time into it, from door-to-door canvassing to work with medical debt. There’s a great groundswell of volunteers. But that is just part one of my aforementioned directive. Medicare for All will not be won solely by the Left deciding that it should take power. We also need to create the intellectual and political synthesis to make it happen. To be clear, this is not needed to fulfill the mandates of Medicare for All’s critics. They have already shown they have no qualms criticizing strawmen rather than any policy put forth by the campaign. Rather, it is needed to make sure that when we pass Medicare for All that it is an unencumbered single payer system, that it withstands constitutional challenge, and that it does not foreclose the path towards fully socialized medicine.

All the “compromise” of the Affordable Care Act did not protect it from being constrained by corporate greed and legal battles. Medicare for All does not suffer from the delusion that we can do this with “bipartisan support” or “bringing all the parties to the table.” We are waging war against the private health insurance industry, so we need to be ready for war. 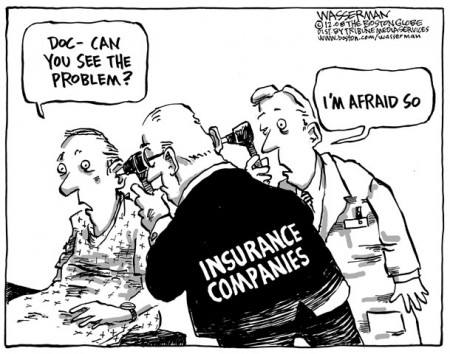 This series will explore the law that currently perpetuates privatized healthcare and what legal battles lie ahead for us. It will come in four parts: Power, Rights, Responsibility, and Regulation.

Part One on Power will explore the Congressional power and the Takings Clause. Can the federal government legislate private health insurance away? Can state governments? If they can, do they need to compensate the owners of those businesses?

Part Two on Rights will explore the treatment of healthcare as a right – a due process right and a human right. Is “life, liberty, and the pursuit of happiness” the foundation for this right? What about state constitutions like New York that say healthcare is a right? Can we penumbra our way into healthcare being a substantive due process right?

And finally Part Four on Regulation will explore how a single payer system could work under U.S. law. Would it be run by an existing Department or would there need to be a new one? Are there models, both within and outside of the U.S., that should be used or avoided?

These posts will getting pretty technical. I will try my best to explain things so that it is understandable to those not familiar with it. I also encourage everyone to give responses – comments, criticisms, and questions are all welcome. And lastly, these are just the musings of myself, and while I hope that everyone in DSA and the Medicare for All campaigns considers them, they represent no one’s opinion but my own.

Speaking of, I do all this on my free time, and am only paid when folks generously decide to compensate my labor. So if you like socialist legal analysis, please consider throwing me $2 or however much you can spare.

2 thoughts on “A Revolution of Care: Exploring the Law of Single Payer”